The International Forum on Urbanism organizes joint (design) studios that are open for students from all member institutions.
As a special form of joint studios the International Forum on Urbanism organizes IFoU Summer Schools outside the regular lecture period.
For each joint studio the content of the program, the study goals and the conditions of participation have to be elaborated and be published on the website of IFoU before the students sign in.
Each participating institution on joint studios appoints one professor who has the task to supervise the quality of the program.


The 2015 Edition of the Summer School with title "Planning and Designing with Water for Sustainability" focuses on the challenges and opportunities for planning and design combining urban development with water management in complex urban environments. The Summer School will take place at the Department of Urbanism, the Faculty of Architecture and the Built Environment of the TU Delft between July 22nd and August 1st 2015. 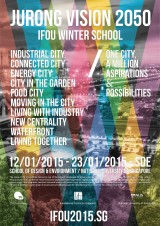 
In 2013 the IFoU Winter School has been organized by the Chinese University of Hong Kong. The theme is the development of Hung Shui Kiu NDA at Shenzhen Bay.


From 7th to 21st July 2011, the annual International Summer Workshop has been held by ETSAB BarcelonaSchool of Architecture in collaboration with IFoU. This year’s subject was related to the 6th IFoU conference TOURBANISM, which took place in January 2012.
The 2011 Summer Workshop explored the character of Barcelona’s emblematic touristic spaces through an analytic approach that formed the bases for the participant’s tentative proposals.
The results of the summer school have been published by ETSAB under the title ‘BeSIDES Tourism – Revisiting Barcelona’s most touristic places’.


The IFoU summer school Learning from Beijing – Rediscovering Urban Design in Booming Metropolitanization will take place in July 2010 at Beijing, China. The summer school in the form of international joint design studio will be hosted and held by the College of Architecture and Urban Planning, Beijing University of Technology (BJUT) in collaboration with the Faculty of Architecture, Delft University of Technology (TU Delft) under the framework of International Forum on Urbanism (IFoU). Students and tutors with different cultural backgrounds will develop design proposals by researches together with the consultancy from professionals within two weeks in order to rediscover the role of urban design, as a planning strategy, in the metropolitan regions undergoing the high-speed urbanization, which is exemplified by Beijing.


In the summer of 2010, in conjunction with various universities, a 3-week field workshop has been set up to research various redevelopment potentialities in the city of Dujiangyan in the Sichuan Province. Coming in 2 years after the initial disaster, an interdisciplinary group of students and researcher will apply insights gathered from the first UE analysis in order to support the ongoing redevelopment process. A ‘development from disaster’ approach is being used wherein opportunities for the short, middle and long term will be synergized.
As the Dujiangyan area is most notable for its 2000-year-old irrigation system, this Unesco World Heritage site has undergone severe ramifications. Not only are large structural consequences to be found, but also social, economical and spatial transformations are undoubtedly expected to follow. While more then 70% of the inhabitants are currently dependent on an agricultural livelihood (making up only 35% of the total area income), the available land is radically shrinking as a rapid urbanization process has commenced. New high-end tourist economies are moving to find develop opportunities as farmers desperately seek to find a place in the new urban setting. The reallocation of human settlements and land administration within the future development vision plan for the city are being challenged. Simultaneously, new materials and buildings techniques are required to sustain the impact of future hazards, and risk assessments are required to safeguard the current investments. With approximately 800 million farmers, the urbanization process of China is still heavily underway. As the shift from a rural to urban life takes place, the redevelopment of Dujiangyan and the Sichuan province are a unique opportunity to find sustainable ways to synergize social, economical and spatial forces within its geo-political framework. Both the built fabric as well as the immaterial substance of the region and its people must be acknowledged if a prosperous future is to be realized. Through a joint effort between foreign and local universities, learning experiences and insights can be shared generating strategies and visions on multiple scales of space (from local to regional to global) and time (short, middle and long term). The case study of Dujiangyan may prove to be an example for other cities as they too struggle to find optimal solutions balancing economic growth with social prosperity.